Basic concepts of viscosity of fluids

On a molecular level, viscosity is caused by the interactions between different molecules in a fluid. This can also be considered to be friction between the molecules. Just like in the case of friction between moving solids, viscosity will determine the energy required to make a fluid flow.

The best way to visualize this is through an example. Consider a cup made of styrofoam with a hole at the bottom. I notice that the cup drains very slowly when we pour honey into it. This is because honey’s viscosity is relatively high when compared to other liquids. When we fill the same cup with water, for example, the water will drain much more quickly. A fluid with a low viscosity is said to be “thin,” while a high viscosity fluid is said to be “thick.” It is easier to move through a low-viscosity fluid (like water) than a high-viscosity fluid (like honey).

Viscosity is influenced by many factors. Examples include temperature, pressure, and the addition of other molecules. Pressure has a small effect on liquids and is often ignored. Adding molecules can have a significant effect. Sugar, for example, makes water more viscous.

Poise (symbol: P) Named after the French physician Jean Louis Marie Poiseuille (1799– 1869), this is the CGS unit of viscosity, equivalent to dyne-second per square centimetre. It is the viscosity of a fluid in which a tangential force of 1 dyne per square centimetre maintains a difference in velocity of 1 centimetre per second between two parallel planes 1 centimetre apart. Even in relation to high-viscosity fluids, this unit is most usually encountered as the centipoise (cP), which is 0.01 poise. Many everyday fluids have viscosities between 0.5 and 1000 cP

This is the SI unit of viscosity, equivalent to newton-second per square metre (N·s m–2). It is sometimes referred to as the “poiseuille” (Pl). One poise is exactly 0.1 Pa·s. One poiseuille is 10 poise or 1000 cP, while 1 cP = 1 mPa·s (one millipascal-second).

This is the cgs unit, equivalent to square centimetre per second. One stokes is equal to the viscosity in poise divided by the density of the fluid in g cm–3. It is most usually encountered as the centistokes (cSt) (= 0.01 stokes).

This is the time for 60 ml of fluid to flow through the calibrated orifice of a Saybolt Universal viscometer at a Kinematic viscosity specified temperature, as prescribed by test method ASTM D 88. For higher viscosities, SSF (Saybolt Seconds Furol) is used.

The ratio of the external force (F) to the affected area (A) is defined as the shear stress (σ):

The shear strain (γ) is defined as the relative change in the length of the material due to the external force:

If the top plate in Figure 1 is moving at a certain velocity (v), the velocity gradient dv/dx is defined as the shear rate (γ̇). Sir Isaac Newton, who formulated the laws of motion and universal gravitation, discovered that in ideal fluids (known as Newtonian fluids), the shear stress (σ) is directly related to the shear rate (γ̇):

Newtonian fluids, as they are called, have a constant viscosity. As you increase the force, the resistance increases, but it’s a proportional increase. No matter how much force is applied to a Newtonian fluid, it keeps acting like a fluid. A Newtonian fluid is a fluid that obeys Newton’s law of friction, where viscosity is independent of the strain rate.

A non-Newtonian fluid is one which does not obey Newton’s law of friction. Most fluid systems, are not Newtonian (known as non-Newtonian fluids) and their viscosity is not constant, but changes as a function of increasing or decreasing the applied shear rate.

Many fluids show a decrease in viscosity as a function of increasing shear rate. These fluids are called pseudoplastic fluids. The “structure” of the fluid in these systems is broken down due to the external force, resulting in a shear thinning behavior. If the initial inter-particle (or molecular) association is strong, the system may behave like a solid at rest. The initial shear stress that is required to overcome the internal forces and disrupt the structure is defined as the yield value of the system. Materials that exhibit a yield value and then demonstrate shear thinning with increasing shear rate are defined as plastic fluids. Some fluids exhibit an increase in viscosity with increasing shear rate, a phenomenon known as shear thickening. These materials are defined as dilatant fluids. 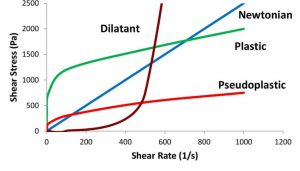 Shear stress as a function of shear rate [1] 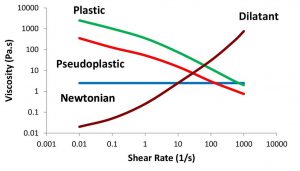 Viscosity as a function of shear rate [1]

But while thixotropic fluids are occasionally mistaken for pseudoplastic fluids, and rheopectic fluids are occasionally mistaken for dilatant fluids, these two types of fluids differ in one crucial way: time dependence. The change in viscosity with respect to stress for dilatant and pseduoplastic fluids is independent of time. But for thixotropic fluids, the viscosity decreases with increased stress the longer the stress is applied. The same goes for rheopectic fluids, the viscosity increases with increased stress the longer said stress is applied.

We use a lot of products in daily life that exhibit thixotropic behavior. Thixotropy is the property that explains why personal care products like hair gels and toothpaste go from liquid to solid when squeezed, but return to their solid states afterwards in order to keep their shape. The rheological properties of structural decomposition and regeneration in relation to time determine the quality of a product. 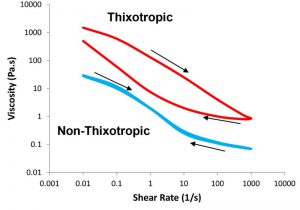 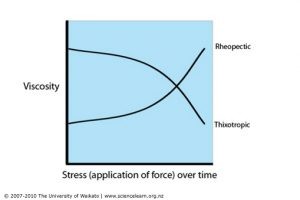 Importance of viscosity in daily life

In many different fields, viscosity can actually be quite useful, even though it seems to be of minor importance in daily life. For instance:

Watch the video or read our whitepapers.