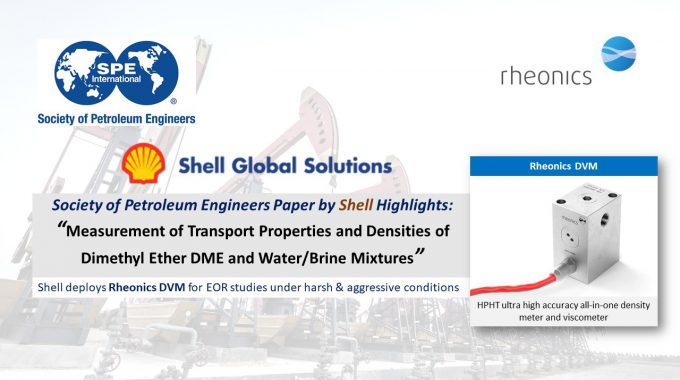 A paper was published for presentation at the SPE (Society of Petroleum Engineers) Improved Oil Recovery Conference originally scheduled to be held in Tulsa, OK, USA, 18 – 22 April 2020. Due to COVID-19 the physical event was postponed until 31 August – 4 September 2020 and was changed to a virtual event. The paper is titled “Measurement of Transport Properties and Densities of Dimethyl Ether DME and Water/Brine Mixtures” and authored by Jingyu Cui and Yunying Qi, Shell Global Solutions US Inc; Birol Dindoruk, Shell International Exploration and Production Inc.

Link to the Publication

Dimethyl ether (DME) is considered to be a potential Enhanced Oil Recovery EOR agent for enhanced waterflooding. Due to its first contact miscibility in hydrocarbons and partial high solubility in water/brine, it partitions preferentially into the hydrocarbon phase upon contact when DME-brine solution is injected into the reservoir. As a result, the residual oil swells and its viscosity is reduced which in turn leads to significantly higher ultimate oil recovery. The amount of swelling and viscosity-reduction depends on the extent of DME partitioning and its availability along with the systems pressure and temperature. In the DME-oil mixing zone, and DME-water zone, the estimation of the DME-Hydrocarbon and DME-water viscosities is crucial to evaluate and understand the performance of DME-enhanced waterflooding (DEW) at reservoir or lab/pilot-scale. Among those, there is no systematic viscosity data found for DME-brine systems, especially for the condition of interest (reservoir conditions). Viscosity of DME-Hydrocarbon follows the traditional mixing rules and expectations quite well; while viscosity of DME-water shown to exhibits very different behavior than expected. In this paper, we present new data on the systematic density and viscosity measurements for DME and Water for the first time. Such essential transport data is necessary to be able to evaluate the DME/DEW injection potential for various applications, from EOR/IOR to near wellbore stimulation.

Some of the important features of this study are:

Transport properties especially that of viscosity are crucial in oil production both in terms of operation and economics. Given that DME is a polar component, it was not readily obvious the transport properties of DME-water/brine system will follow the expected trends and mixing rules (i.e., behavior of alkane gases with aqueous solutions).

Based on the symptomatic analysis performed, it was believed that DME-brine solution must have higher viscosity than pure brine solution unless there are other factors. Preliminary viscosity measurements confirmed this hypothesis (Figure 3). Therefore, a deeper look into this unexpected viscosity elevation with respect to water is needed. However, there is no known numerical tool which was able to predict and represent this behavior correctly. 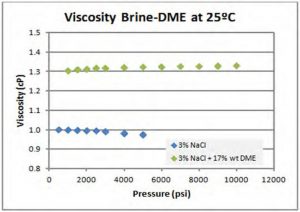 Figure 3—Preliminary Viscosity Measurements for quick-look at the viscosity of DME-brine system at 20 C (Raw data: no pressure and temperature corrections performed, as seen in water-pressure trend).

To be able to explain our observations in the lab and fill this gap in the context of essential data to explain and design laboratory experiments, and enable more reliable forecasts in various scales, we have designed a comprehensive experimental program to address this, and to develop a trend capturing formula or mixing-rule which can be used in populating fluid description requirements for reservoir simulators or other tools to predict DME-brine viscosity and also density. In order to achieve this, we have followed the steps below.

DVM is an inline module to measure the viscosity, density and temperature of the fluid flowing through the module. The flow through module is based on the DVM’s density and viscosity sensor. The module has a flow-through channel with an internal diameter of 12 mm. The Sensor is mounted parallel to the flow path of the fluid and removes any dead zones in the fluid flow. The standard module has Swagelok connections which can be replaced with other suitable threaded connections. A Teflon seal reduces any chance of fluid influx in the connector thread. The sensor DVM is mounted with a threaded bolt to allow easy removal for cleaning and replacement. It has a simple, compact, and robust construction (See Figure 4). 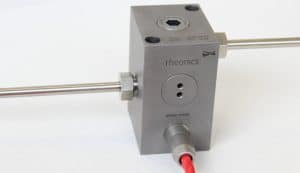 The Rheonics DVM measures viscosity and density by means of a torsional resonator, one end of which is immersed in the fluid under test. The more viscous the fluid, the higher the mechanical damping of the resonator. By measuring the damping, the product of viscosity and density may be calculated by Rheonics’ proprietary algorithms. Our initial work showed that the algorithm vendor provided did not taking in to account the effect of pressure and temperature on the equipment. Vendor applied this input to improve their algorithms, and lead to more consistent correction factor. The denser the fluid, the lower the resonant frequency. A denser fluid increases the mass loading of the resonator. The resonator is both excited and sensed by means of an electromagnetic transducer mounted in the sensor’s body.

Damping is measured by sensing and evaluation electronics and stable, high accuracy and repeatable readings are obtained based on proprietary [6] gated phase-locked loop technology.

In order to convert the raw measurements to physically more accurate measurements, device correction parameters were needed for the particular model utilized. Those correction factors were provided by the manufacturer both for viscosity and density.

Data collected with the DVM for this study

Viscosity and Density of DI water at 35°C

Calibration runs were performed before the full measurements performed on DME-Water solutions. It is important to calibrate the system with a known fluid to judge the accuracy of the measurement. As a result, DI water is chosen for this purpose due to two reasons:

Calibration experiments were conducted at 35C; results were compared with NIST data at the same temperature. Figure 5 and Figure 6 show good agreement between measured viscosity and density data and that of NIST data. 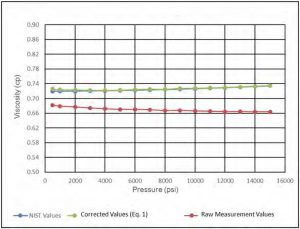 Based on the experimental matrix in Table 2, density for a series of DME-DI water mixtures have been measured. Tables 3 to 5 present the experimental data at three different temperatures in a tabular form. 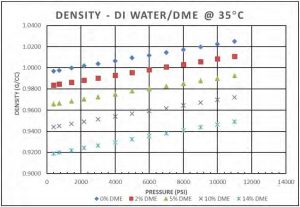 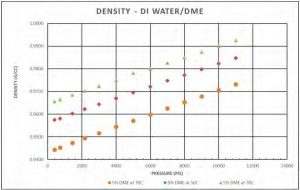 Similarly, viscosities of DME/DI water were also measured at corresponding concentrations and conditions. Tables 6 and 8 present the measured data in tabular form. 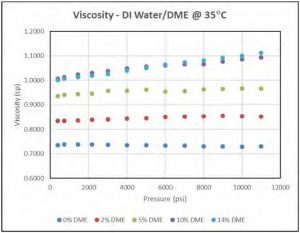 In order to be able to predict density and viscosity of a wide range of DI water/DME mixtures, correlations in the form of mixing rules have been developed using the generated set of experimental data and pure component properties.

In the following section, using the experiments performed, we will demonstrate the range of validity and accuracy of the simple correlative tools that we have developed for Brine-DME systems. 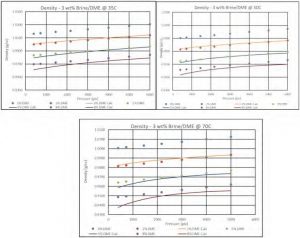 Overall the proposed mixing rule for density predicts the mixture density well at medium to low DME concentrations, and slightly underpredicts at higher DME concentrations (i.e., 8 mol %) while the deviations are still within the expected margins.

Figure 14 indicates that the mixing rules for the viscosity over estimates the viscosities at 35 C, at 50 C and 70 C, while still showing an overall good agreement with the experimental data.

Conclusion/Results from the study

A systematic methodology with a newer viscometer (Rheonics DVM) was developed for DME dissolved aqueous systems.  After initial calibrations and verification tests with known substances, such as water,

How is Rheonics DVM helping solve these challenges?

New reservoirs are increasingly ultra-deep with very high pressure conditions (>25000 psi) and high temperature (>400 °F). It is very expensive to acquire sample fluids from ultra-deep wells so it is important that density and viscosity measurements be carried out with minimal volume of the reservoir fluid. Overall for PVT studies, density and viscosity measurements should be done:

Rheonics’ DVM is a single instrument combining HTHP density meter and viscometer that delivers simultaneous density, viscosity and temperature measurement in the harshest of conditions. 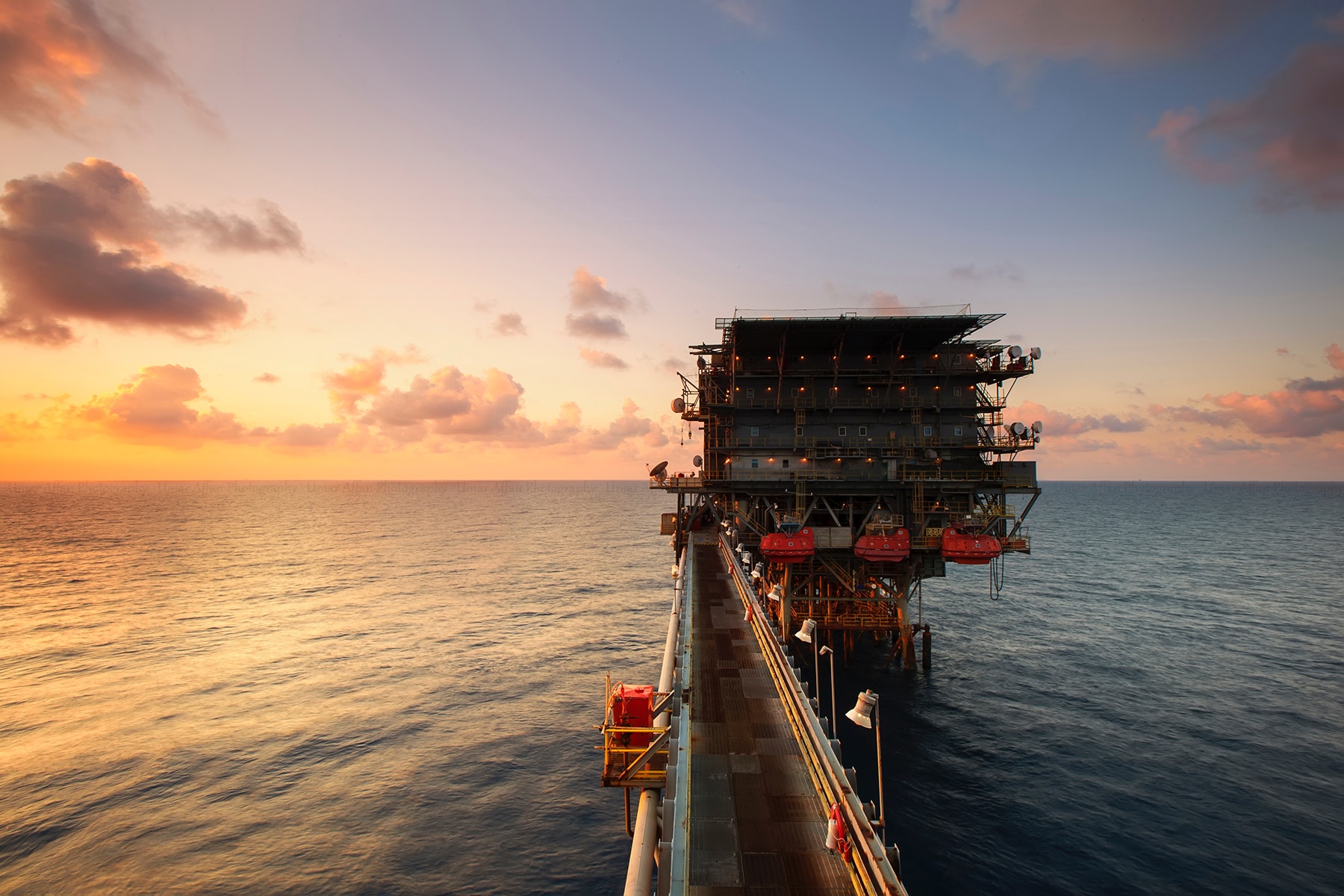 PVT analysis is performed to relate surface production to underground  withdrawal for an oil reservoir and to simulate what takes place in the reservoir during production. PVT data have far-reaching applications in reservoir engineering, from estimating reserves to planning surface…

DVM is a unique 3-in-1 process instrument. Density meter, Viscometer and Temperature gauge all-in-one: it is a small form-factor robust device.

Rheonics’ DVM is a unique product that replaces two alternatives and offers better performance while operating at true reservoir conditions. It eliminates the difficulty of co-locating two different instruments in any application needing density-viscosity monitoring of the process fluid.

Minimal reservoir fluid is used for testing in the DVM since there is no requirement of a separate line or sampling system. Safe and cost-effective to operate, DVM requires only 0.7ml of sample to measure viscosity and density across the complete P,T range saving time and money. 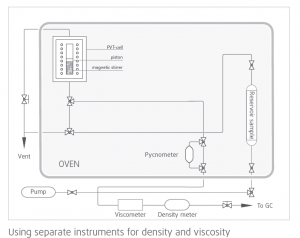 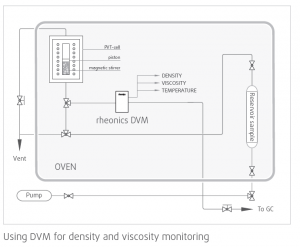 Despite the importance of density and viscosity, they are notoriously difficult to measure under the extreme conditions found in the oil and gas industry. Resonant fluid property sensors are pushing back the limits of measurements thought to be possible only with laboratory-grade instruments.

Unique advantages with the Rheonics DVM for reservoir analysis

Single instrument for both density and viscosity

High accuracy even in harshest of conditions

Lowest fluid use for providing measurements

Less than 0.7 cc fluid sample required for measurement of both density and viscosity under reservoir conditions

All Titanium wetted parts. Built to operate in oven or bath. Standalone DTCM for smallest form factor density and viscosity.

No hardware or software changes to measure density and viscosity across complete range. No re-calibration required to remove effect of viscosity or change of pistons to measure viscosity in different range.