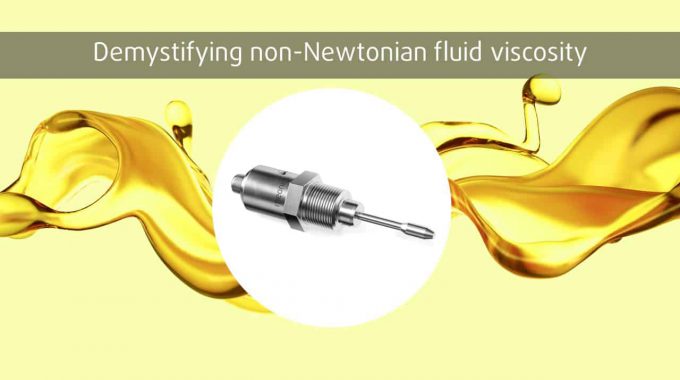 Many, if not most, fluids exhibit non-Newtonian behavior. A fluid is said to be non-Newtonian when its measured viscosity depends on the shear rate with which the measurement is conducted.

1. A brief introduction to non-Newtonian fluids

Viscosity is defined as the ratio of shear stress to shear rate when a fluid is subjected to uniform shearing, shown schematically in Fig. 1:

Fig. 1: A Newtonian fluid being sheared between two parallel plates

For Newtonian fluids, changing the force you apply to the fluid will not change their viscosity. The viscosity remains constant as the force applied changes. In a Newtonian fluid the relation between shear stress and the shear rate is linear, passing through the origin, the constant of proportionality being coefficient of viscosity.

In case of the Non-Newtonian fluids, the concept of viscosity usually used in fluid mechanics to characterize the shear proprieties of a fluid is not quite adequate. Instead, they are studied best through several other rheological proprieties that relate to stress and strain rate tensors under many different flow conditions which are measured using different devices or rheometers.

Most fluids exhibit a non-linear relationship between shear stress and shear rate. That means that the measured viscosity is dependent on the type of viscometer used for the measurement. The SRV has a much higher shear rate than most rotational, capillary and efflux cup viscometers. Therefore, the SRV will often show a substantially different viscosity than will a laboratory rotational instrument.

The following paragraphs describe measurements of a typical shear thinning fluid, and the implications for inline measurements with the Rheonics SRV.

Concentrated detergent solutions, such as shampoos, dishwashing liquids and fabric softeners, typically show shear-thinning behavior. When a rotational viscometer, such as a Brookfield DV, is used to measure their viscosity, the indicated viscosity decreases as the spindle rotational speed increases. The following chart, Fig. 3, illustrates this shear thinning behavior:

When measured with a Rheonics SRV viscometer, the fabric softener gives an indicated viscosity of 9.7 cPs. The much lower value is traceable to the same phenomenon seen in Fig. 1, the decrease in viscosity as the spindle speed increases. The material is shear-thinning, and the shear rate of the SRV is about two orders of magnitude higher than is attainable with typical rotational viscometers. Therefore, it is impossible to get a numerical match between the SRV and rotational viscometers except for strictly Newtonian, that is, shear rate-independent fluids.

What does this mean for applications in which the fluid is highly shear-dependent? That depends strongly on what the SRV will be used for.

Fig. 4. Inline viscometer (left) and installed in a flowline adapter for inline applications

One typical use for an inline viscometer is to monitor the viscosity of a product to verify that its viscosity remains constant. Process parameters may then be adjusted by the operator to keep the viscosity within a specified range. In that case, it may be possible to derive a conversion formula that allows Rheonics SRV readings to be correlated with laboratory measurements with defined shear conditions.

Alternatively, the Rheonics SRV may be used as the sensor in a control loop to automatically adjust one or more process parameters in order to keep the product viscosity within specified limits. A typical application is in flexographic or rotogravure printing machines, in which the Rheonics SRV is used to keep the viscosity of the printing ink constant.

In either case, when highly non-Newtonian fluids, such as soap- and surfactant containing products, are being monitored or controlled, the SRV must be operated in a fluid that is flowing past the sensor. It will not give reproducible readings if simply immersed in a beaker of product. When used in a line containing flowing product, it will give a clear and reproducible response to any changes in the product viscosity.

Monitor the viscosity of a product to verify that its viscosity remains constant.

Sensor can be used in a control loop to automatically adjust one or more process parameters in order to keep the product viscosity within specified limits.

NOTE: Flow regime (consistency) is important to get reliable & accurate monitoring in non-Newtonian process fluids. Flow the fluid across the sensor and ensure consistent flow regime by having similar fluid velocity and cross-section during all measurements.

3. Recommendations for testing applicability of Rheonics SRV to measurements with non-Newtonian fluids

When evaluating the Rheonics SRV for a particular inline measurement, it is essential to operate the SRV under actual process conditions. The SRV must be placed in a process line in which the product is flowing, and the viscosity and temperature recorded during operation of the process line.

It is absolutely essential that the SRV is NOT evaluated based on static measurements. Putting the SRV in a beaker of stationary fluid will typically not give measurements that agree with measurements taken in the actual process line with flow rates typical of operation of that process.

For applications in which there is unclear if the Rheonics SRV will provide useful measurements, please contact Rheonics to arrange a trial of one of the SRV sensors in your application.